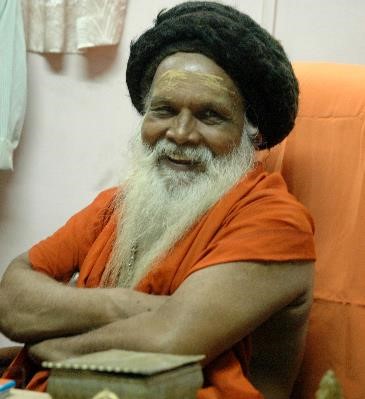 Swami Sathyananda Saraswathy thiruvadikal is the greatest seer in current times. An epitome of Gurubhakthi, ardent devotee of Jagath Janani, an exemplary orator, a true Sanyasi, protector of Hindu Dharma and the list goes on…
Born on September 25,1935 at Andoorkonam village Thiruvananthpuram in a well respected family, Swamiji lived the life of a role model as a student, teacher, poet, orator, social activist and above all a perfect disciple of his Guru as well as the protector of Hindu Dharma. Swamji left his physical body behind on November 25, 2006 at Jyothirkshetra, world’s largest Samadhi mandapa till date.
Swamiji used to posses extraordinary skills as a child. Swamiji used to play with Krishna and run around the house, while others not being able to see the lord Krishna, whom the young child was playing with, used to undermine his devotion.
After completing his graduation, he was teaching at the family school and was having a secret mission to go to the Himalayas. On the eve planned departure, Gurupadar sent some one to have Swamiji come to Ashram and made just one statement that “there is nothing there, that is not here”, completely changing the direction of Swamiji’s life. Since then Swamiji stayed at the Ashram and managed the Ashram.
Through intense penance, Swamiji used to continuously enjoy the presence of Divine mother. Often experiencing divine mother sitting next to Swamiji and Swamiji used to write down notes from those conversations. some of the extremely efficient medicines that Swamiji provided to the world came out through these communications.
At Her Divine command Swamiji stepped out of the ashram to protect the Hindu Dharma. Swamiji turned out to be a very engaging speaker, each conversation lasting four to five hours, grabbing the complete attention of entire audience. Swamiji strongly stood against forced religions conversions, false propaganda and distortion of truth by the proselytizing religion and the communists.
Swamiji had painfully restored thousands of temples destroyed by the modern day invaders. Notable efforts being that of Palukachi mala near Kannore and Protection of Nilackal temple.
Swamiji took initiative to create a news paper – Punnyabhoomi, in the year 1998, since there was no common communication media for the Hindus at that time. All other existing media was completely biased against the Hindu community even at that time.
As an ardent devotee of mother goddess, Swamiji had initiated three very large Lalitha Sahasranama Archanas

Swamiji had delivered the keynote address at the World Hindu Conference 2000,Port of Spain,Trinidad and Tobago,in August 2000, led the Indian delegates in the sessions on Elimination of Poverty at the Millennium World Peace Summit of Religious and Spiritual Leaders at the United Nations ,in August 2000 and inspired the formation of Kerala Hindus of North America (KHNA) aimed at integrating the future generations with their cultures and provided Divine patronage. Swamiji inaugurated the First, Second and Third biennial National Conventions of KHNA at Dallas(2001), Houston(2003) and Chicago(2005).

It was Swamiji’s vision to have a Hanuman Temple in North America to save this country from natural disasters. Swamiji was concerned about constant sinking of American land as well as series of natural disasters coming up and Swamiji gifted this Hanuaman Vigraha to protect the Americas !
Every word of Swamiji had come true. Some of the casual statements made by Swamiji were not well understood at that time, but its value and meaning was being realized four or five decades later. Swamiji never created any cult or asked anyone to worship any particular deity. But always helped people to point towards the right spiritual path they could take for their own betterment. According to Swamiji, there is only one Brahman – the supreme power, but there are so many gods who are representing various roles. Like a mother being someones’ daughter, a wife, a sister, a neighbor and even a cousin – same person playing different roles at the same time with completely different characteristics.